What does it take to have a smooth and efficient audio recording experience? It usually means putting in lots of time and effort into perfecting  the audio script for voiceovers. This often means you will need to create, format and organize a voiceover script that is separate from the storyboard. This allows the talent to focus on the script alone. It also allows you to clean up the script, eliminating tongue twisters, awkward phrasing and long sentences that need a breath in the middle.

Whether you are recording at a studio or in-house; whether you are using a professional voiceover artist or a coerced colleague, there are certain approaches to preparing an audio script that will make the recording frictionless.

Here are tips I’ve collected over the years that apply to all types of recording—at work, home, and in professional studios. Some are known conventions and some are the result of making humiliating mistakes. Also, check out this podcast to hear what voice actors say they need: Behind the Scenes with Three Voice Actors.

Every script has errors. It could be incorrect content or a misuse of grammar. Each error you discover during the recording session slows things down and stops the narrator’s momentum. If the error requires contacting the subject matter expert for pronunciation or meaning, that can be a real headache.

Therefore, go over that script with a thorough eye for detail and read it aloud several times. Ask someone else to review it for errors too. If you are present during the recording, it is not uncommon to make real-time corrections, but it slows things down. Every interruption means more time and perhaps, an annoyed narrator.

I remember the first time I attended a recording for a script that I wrote, I was surprised that the voice talent didn’t always intonate sentences the way I intended. In hindsight, this seems obvious. How could someone else, who is not even familiar with the content, read a script with the same inflection I had in my mind.

That’s when I started to add emphasis in every script using italics or boldface. To avoid confusion, use one method for the entire script and communicate this convention to your narrator in a prerecording briefing.

Using terms that are unique to a field can slow down a recording. If you use medical, technical or other specialized vocabularies, find a way to communicate the pronunciation of these words and acronyms in the script. Point these out to the narrator before recording begins. Some prefer the pronunciation key at the start of the script; others prefer it directly in the script.

For example, you might write the phonetic spelling of a term in brackets, so the talent can quickly see the pronunciation. If the script uses acronyms, indicate whether the term should be pronounced by its letters or as a word. For example, when the letters alone are used, I use dashes to separate the letters, as in U-S-A.

4. Indicate Where You Need Pauses

When writing for eLearning, you may wish to insert pauses in the script, to accommodate graphical changes on the screen, such as animations and progressive reveals. You can add an ellipsis (three dots) to the script or write the word “pause” in brackets when you need that extra half-second of silence.

Let the narrator know that at these points, you would like a pause of “one beat.” That nearly imperceptible moment of silence will help you synchronize the audio and visuals seamlessly during course production.

During a recording at a professional studio, one of my team members created a script without page numbers. The engineer repeatedly teased the writer about this. Scripts always need page numbers. If there are questions, everyone involved can easily reference the page. Also, be sure the page numbers are located in a very obvious place, such as bottom center.

Some voice artists will print your script and others read online. Either way, organize your document so the reader will not need to turn the page or scroll to the next page in the middle of a sentence or paragraph. The sound of paper turning usually gets picked up by the mic. And if reading the script online, it will cause an unnecessary interruption for the narrator to scroll down in the middle of a sentence.

When recording for an eLearning course, I like to prepare the script so that the audio segment for each slide is associated with a unique file name. Devise a naming strategy that makes sense in your production environment. For example, m2s3.wav indicates this is the audio file you will be using in module 2-slide 3.

Therefore, my scripts have two columns—a narrow one on the left and a wider one on the right. The column on the left indicates the name of the audio file; the column on the right holds the script. This ensures that everything is well-defined for the person (even if it’s you) doing the postproduction work of breaking up the audio into smaller files.

8. Make it Easy for the Voice Actor

Always provide the script to your narrator a few days before the recording session. Professionals always ask for a script ahead of time, so it makes sense to give it to your colleagues too. Not only will the recording have fewer retakes, your narrator will feel more comfortable and prepared. Voice actor, Kim Handysides, has additional advice: Write Better eLearning Scripts.

You may be writing an audio script for an explainer video, educational podcast, dialogue or a story or scenario. All of these mediums may require stage direction. Professional voice artists should be able to make their tone sound dramatic, educational, light-hearted or friendly, for example. They can often portray different characters too. If you provide direction in the script, they should be able to fulfill your request.

These are some of the key points I’ve learned for preparing audio scripts for recording.  In addition, you always need to review the script with your voice talent to discuss the conventions you use and to provide context so they know what role, voice and tone to adopt.

Get the latest articles, resources and freebies once a month plus 12 Scripting Tips. 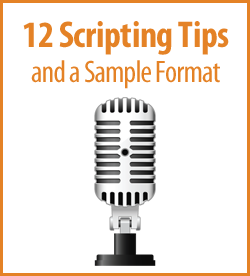 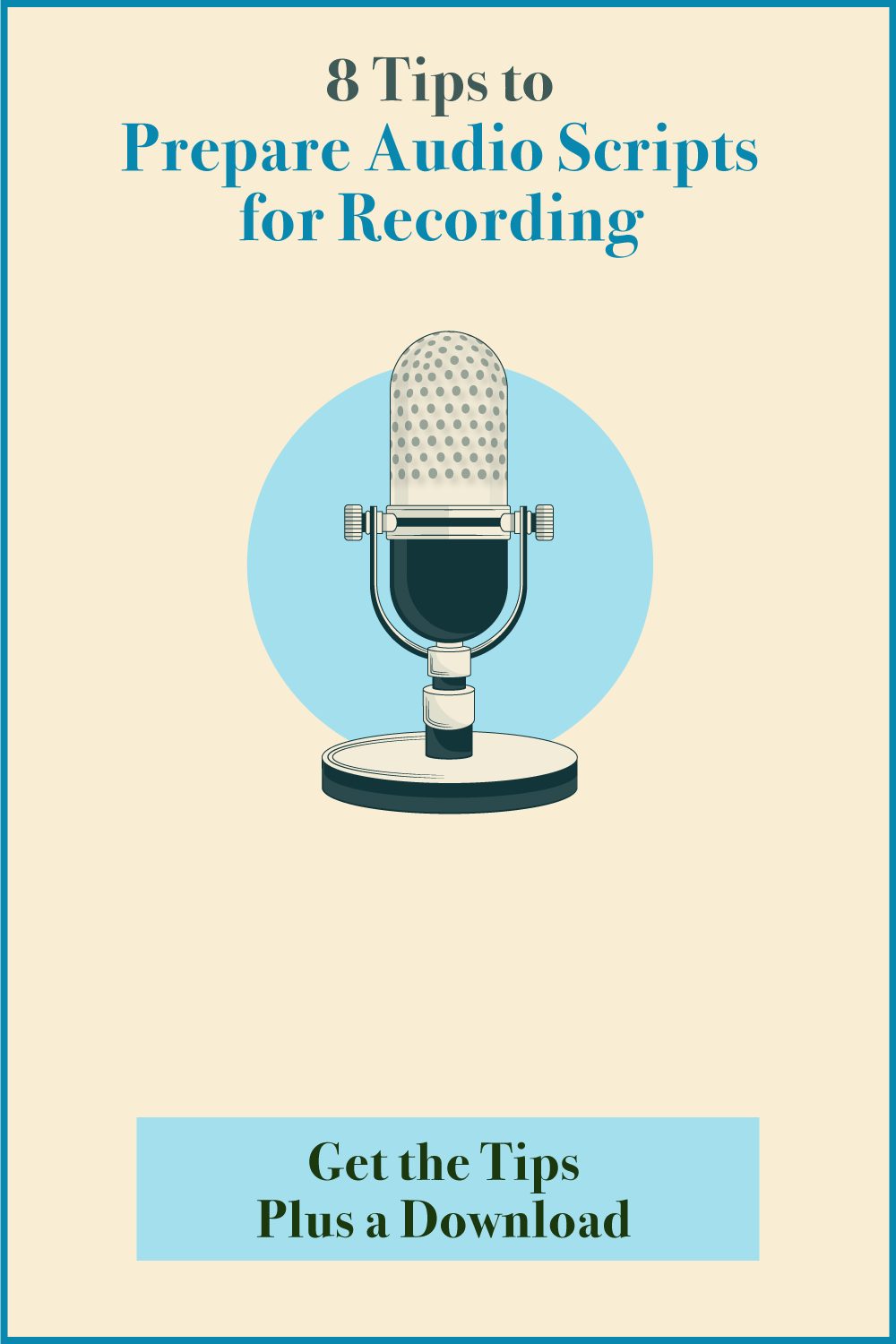