A prototype is a concrete model of a rough idea. Most design fields use prototypes to demonstrate how software, apps and websites will function or look. These days, it is standard to build eLearning prototypes for instructional design too.

In his book, Leaving ADDIE for SAM, Michael Allen points out that too often, people high up in an organization will dictate training needs and approaches for their people. This often ends up in a learning intervention that is irrelevant or uninteresting. By prototyping for the purpose of showing it to learners, you will likely elevate the quality of instruction when you use their input and feedback.

Benefits of Creating an eLearning Prototype

The advantages of prototyping far outweigh the disadvantages. So, let’s start with the benefits. eLearning prototypes can:

It’s hard to think of disadvantages to prototyping. I am grudgingly listing a few here.

1. Functional or Interactive Prototype: What to Include

The purpose of this prototype is to demonstrate functionality in an eLearning product. Consider the core interactive activities that users will complete. Prototype one or more of these interactions. This could be a game, a simulation or instructional exercise. Then ask learners to complete the activity and see how they perform. Include the following items:

2. Look and Feel eLearning Prototype: What to Include

The purpose of a look and feel prototype is to show the user interface and visual design you will be using in a course. Include the following items:

3. Responsive eLearning Prototype: What to Include

If you are designing a product to be used on desktop and mobile devices, you’ll need to test that it looks good and works well on all of those devices. You need the product to be responsive. It’s best to prototype this early in the design process to ensure it’s going to look and function as intended on computers, tablets and phones. One approach is to prototype using a mobile-first design strategies. See this guide to mobile first responsive design. Include the following in your responsive prototype:

What to Include in a Feasibility Prototype

The feasibility prototype is good if you or a team have several potential solutions. Or if you’re not sure that your idea can work. Or if you think it will take too long to implement. You can create a prototype of each idea as a proof of concept to see if it is practical and worth implementing. In this case, prototype the challenge, such as:

Your prototypes can range from low-fidelity to high-fidelity. You can also start with a low-fidelity prototype and as you refine it through feedback, move to higher fidelity.

Although this article focuses on eLearning prototypes, you can prototype nearly any type of learning or performance support product or event. For example, you might facilitate a brief training session as a pilot for a longer workshop. Or you might curate content for a small group of people as a prototype for a company-wide curation effort. You can prototype job aids or shortened versions of a video or podcast.

What do you include in your prototypes? Answer in the Comments section below. 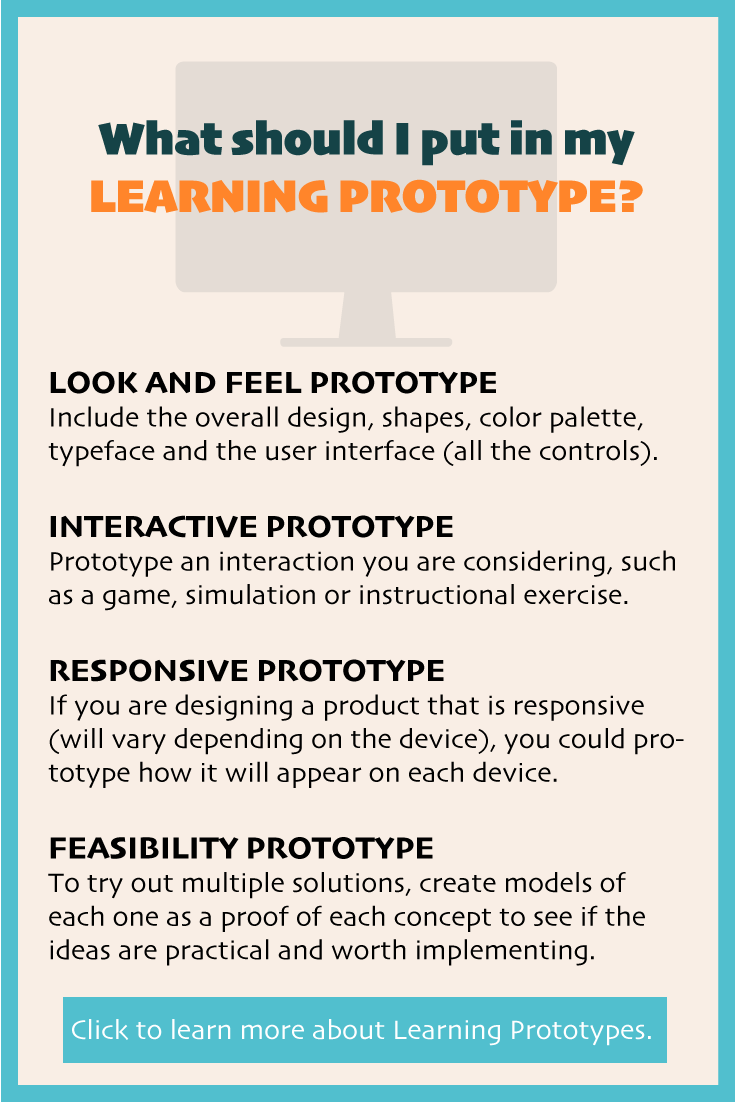