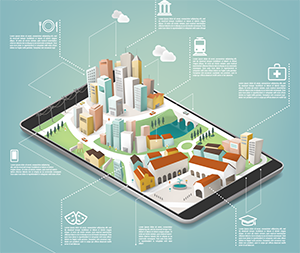 Do you wonder what you might be designing in the future? If so, I think you’ll find that this article, by guest author Athanasios Papagelis, will stir your imagination.  — Connie

Augmented learning, a natural evolution of today’s eLearning, is coming of age. It’s goal is to re-unite interactivity, multimedia, Internet access and mobile learning with a sense of context, locality and physical space.

In this article, I’ll give an overview of what augmented learning is, how it’s progressing and where it’s heading. Wikipedia offers an accurate though slightly abstract definition: “Augmented learning is an on-demand learning technique where the environment adapts to the learner.”

In augmented learning, the context (the place or the situation the learner is in) is taken into account by the eLearning system in order to display or superimpose relevant material. It’s similar to those headphone tours of museums, but magnified, since it can also incorporate text, video, 3D graphics, web pages and a lot more. Also, augmented learning is not constrained to a physical building.

Augmented learning is all about superimposing information on the learner’s visual or auditory field, in essence augmenting his or her sensory inputs. In fact, a major part of augmented learning is known as augmented reality, which is concerned explicitly with enriching the users perception of outside reality with extra information. This superimposition typically has the form of popup displays of information, but it can go as far as showing full-blown 3D scenes on top of one’s normal view based on the user’s eye movement and position. For example, an augmented reality app could display ancient buildings in all their glory as a learner stands over their ruins at an archaeological site.

Getting the Augmented Reality Experience Now

Until relatively recent times, augmented learning was mostly available in academic, research and experimental contexts, with not many (if any) products having an impact on the training market. What has made augmented learning and augmented reality more of a, well, reality, is the emergence of powerful mobile devices, like the modern iOS and Android smartphones. Their fast processors, capable graphic cards, always-on Internet access, location awareness through GPS, and audio/video recording capabilities make all the difference.

Now, devices are showing the potential for a powerful augmented reality experience. With its physicality and contextual nature, augmented reality is a great fit for many kinds of learning. Imagine the vivid impression and impact that the aforementioned virtual ancient world would have upon the students of history or archeology, compared to merely reading about or watching a video while in another location. In the workplace, imagine being a new hire in a complex facility, such as a water treatment plant. On your first day, you wear an augmented reality device, which introduces you to the systems and components of the plant.

Augmented reality can also be used in combination with motion tracking to provide learners with the ability to virtually “touch” and manipulate objects. Virtual manipulation has a huge potential, allowing learners to operate heavy machinery, simulate physics experiments, interact with chemical molecule models, or even perform virtual surgery. Throw in force or haptic feedback (a method for recreating the sense of touch in virtual environments) and we’re even closer to creating an alternative reality for workplace training, education, and recreation.

Even traditional webpages and textbooks can benefit from augmented learning techniques, by mixing the traditional textual content with contextual 3D items (illustrations, examples, technical diagrams that “come to life”). An example of this is the augmented reality tool ZooBurst that allows users to create 3D pop-up designs that can be attached to websites or printed books, and viewed through a special mobile or desktop application. In fact, one can imagine a future were augmented reality devices are so prevalent and entrenched in our everyday lives that it side-steps formal learning.

Such a device, for example, could superimpose the name of any plant directly next to it’s image in our eyes, giving the average person access to the world of botany. Or how about an application that uses optical character recognition to scan words and then translates and replaces written text from one language into another, allowing a tourist to “read” signs, menus and posters? The WordLens app, which has been acquired by Google, does just that.

Is there a downside to learning this way?

It can be argued that the ease of augmented learning, such as automatic translation, is detrimental to learning. A similar argument was raised when some thought that calculators would make pupils forget their multiplication tables. Though there is not sufficient research to know what effect it will have, this author prefers to see it in a positive light, as a technology that provides access to a world of new content on demand.

Augmented learning has been in development for years and it is anything but vaporware. It’s a technology that’s getting more mature by the day, as mobile processors become ever more powerful and wireless Internet becomes more pervasive. Recent developments, like the virtual reality headset, Oculus Rift, or Google Glass, are products that represent the second wave of commoditization of augmented reality. They have huge potential for eLearning applications. Whatever the future of eLearning might be, augmented learning is bound to play a prominent role.

Athanasios Papagelis is an entrepreneur, computer software specialist and co-founder of TalentLMS and eFront, software companies offering educational programs which meet the learning and talent management needs of small and medium organizations, as well as individual students.

Don’t miss a thing! Get The eLearning Coach delivered to your Inbox every month, with ideas, articles, freebies and resources.